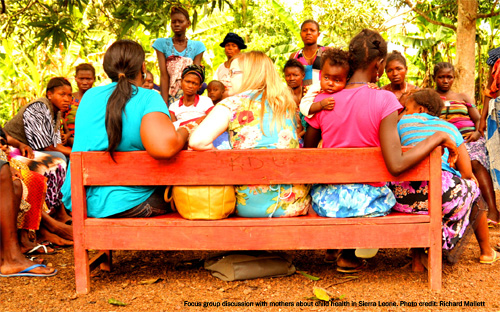 If development practitioners aim to improve people’s lives – either by providing improved healthcare or ensuring access to justice – they need to engage with the multiple providers of these services that people actually use, rather than just one part of the system.

In 2012, while interviewing a chief in Sierra Leone, our discussions were interrupted by a couple who had come to see the chief to resolve a dispute. The man was standing for Parliament in the 2012 elections and someone had defaced his campaign posters. When the woman reproached the alleged culprit, he verbally abused her. The chief deemed the defacement of the campaign posters a matter of electoral law and thus outside his jurisdiction. He encouraged the couple to take the matter to the Sierra Leone Police, despite the couple’s plea that the chief could act much faster. However, the verbal abuse suffered by the women did fall within the chief’s jurisdiction under customary law. After establishing the name and address of the accused, the chief issued a summons requesting that he attend a hearing at the chief’s house that weekend. The woman paid the chief a fee of 25,000 Leones (approximately 3.40 GBP) for the issuing of the summons and the couple departed.

More than 15 years of reforms of the justice sector in Sierra Leone have focused overwhelmingly on state systems [^], despite the fact that the majority of Sierra Leoneans access justice through alternative means. While ‘informal’ dispute resolution is not always benign, the above story does make clear the disconnect between donor-sponsored reforms and the reality of how justice is sought at the local level.

Similar challenges can be seen in the health sector. During research in Sierra Leone [^] this year, communities spoke of taking sick infants to traditional healers, rather than government-run clinics, because they were more accessible, affordable and provided important treatments for spiritual causes of illness. This is despite massive investments in the health sector and the launch of the Free Health Care Initiative [^] in 2010, making basic health services for pregnant women and children under five free (at least in theory).

Reforms of state provided services – both in the justice and health sectors – are clearly important. In Sierra Leone, more people trust the police than in the past and more mothers are utilising health clinics [^], helping to reduce appalling rates of maternal and child mortality. Yet, in both sectors, these state providers exist within plural systems in which a variety of providers of care and dispute resolution interact in often highly cooperative ways. There are examples of police referring minor cases to chiefs for customary dispute resolution; and cases of government health clinics referring illnesses deemed to be ‘spiritual’ to traditional healers. Development interventions must understand these interactive delivery systems if their interventions are to be effective.

Furthermore, given ongoing accessibility issues, it is not surprising that formal providers exist within a broader network of providers. In one community we visited earlier this year, for instance, the nearest health facility is 5 kilometres away, no one in the village owns a vehicle and there is no phone signal to call for outside help. As a result, households only make the expensive trip (or, more often than not, the long walk) to the clinic when absolutely necessary. Recently, three women have given birth on the walk to the clinic and one of the children died. Communities innovate alternatives to help them deal with the illnesses, disputes and other problems that are a part of life everywhere.

Are there dangers of engaging with a broader set of providers? Of course. Chiefs in Sierra Leone can enforce highly discriminatory customary laws that contravene peoples’ rights, particularly those of women. Traditional healers can diagnose illness in ways that overlook biomedical causes and can thus leave patients dangerously ill or worse. But these challenges should be a reason to engage these actors – not to overlook them in the hope that they will simply disappear.

What is more, state service delivery is not without tremendous shortcomings. A number of government health clinics are consistently reported to routinely charge patients for services that are meant to be free – denying people services that the state has promised. Medicine stock outs [^] are common occurrences, leading people to rely upon unregulated drug peddlers [^] selling expired or counterfeit medication. Clinic staff are poorly trained and have been found to misdiagnose [^] patients in some cases. Sierra Leone’s justice system fares no better. Magistrate courts are located only in district capitals – making them highly inaccessible. There are extreme shortages [^] of magistrates, prosecutors, lawyers and judges throughout the country – resulting in high case backlogs and incredibly high rates of pre-trial detention.

If development practitioners aim to improve people’s quality of life – either by providing improved healthcare or by ensuring access to  fair and speedy justice – then they need to engage with the multiple providers of these services that people actually use, rather than just one part of the system that external actors would ideally like people to use. Some work has begun in this vein. For example, some traditional birth attendants have been trained [^] in Sierra Leone and cooperate with government health facilities by bringing women in labour to deliver at the clinic, rather than at home. But much more recognition of the interactive nature of delivery systems is needed.

Understanding service access beyond the state: A networked perspective

This can start by developing an understanding of how people actually navigate delivery systems – be it in healthcare, justice or other sectors. Providers rarely exist as discrete options that people utilise in isolation. Rather, people try multiple providers at once and often move between them. Because providers exist within an interactive system, engaging with one part of this system will necessarily have consequences for the other parts. As a result, development interventions must understand the interconnections and the impact (limited or otherwise) that tinkering with one part of a system can have.

This blog post was originally published on the Local First Blog [^] and can be read here: Engaging with plural delivery systems: Community approaches to health and justice in Sierra Leone [^].