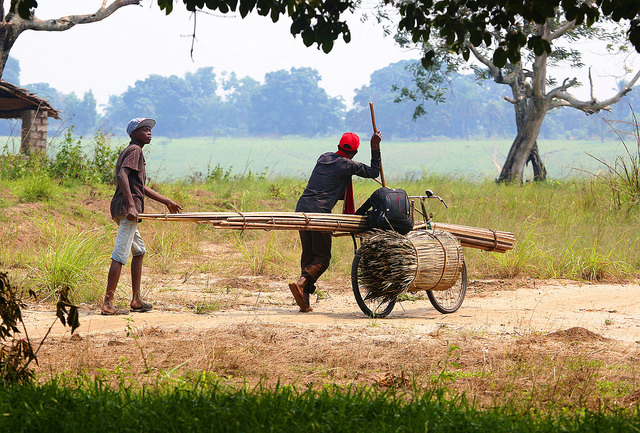 Getting beyond seeds and tools in eastern DRC

I’m just back from a short trip to DRC which included a few days in Bukavu with our DRC research partner ISDR [^] and meetings with people working for international agencies. One of the things that I was asking about was what different actors were doing to support livelihoods in eastern DRC. It’s a familiar and pretty thin list. There’s some food aid, although less than I expected with 350,000 beneficiaries in 2012 from a population of 4.6 million and half of those accounted by school feeding. There’s a fair amount of seeds and tool distributions and now seed fairs and vouchers. After that you have to start scratching around for further examples – a bit of micro-finance, surprisingly few market chain focussed interventions, a little bit of agricultural extension advice, some support to small livestock (chickens, goats and surprisingly guinea pigs) and not much else that I came across. Now that summary comes with a hefty caveat that I was only in town for a few days, didn’t talk to everyone and make no claims at all to being comprehensive (do let me know what I’ve missed in the comments section). But it’s a list that’s depressingly consistent with the findings from ‘Missing the Point’ [^] from a review for ECHO of their funding for livelihoods programmes [^]  and work for WFP evaluating their approach to livelihoods [^] programming.

There are, I think, three basic problems with much aid intended to support livelihoods in fragile and conflict affected places. They are:

The first problem is that any livelihoods programming is often relatively small-scale and covering a tiny proportion of the population in need (whether through food insecurity, poverty or displacement). When asked why this is, aid agency staff generally cite the difficulties of scaling up given ongoing insecurity and conflict. But in eastern DRC there are large-scale aid programmes supporting health care, IRC has been implementing a large-scale community driven development programme (Tuungaane [^]) for several years and UNICEF coordinates a large-scale non-food item response to displacement. So the security constraints don’t seem insurmountable – if you can get drugs to clinics and kitchen sets to displaced people then assistance to help people make a living shouldn’t be impossible. The lack of scale also seems wrapped up in the idea that support to livelihoods is ‘developmental’ and that donors are reluctant to fund longer-term approaches in a situation where humanitarian funding streams and approaches remain dominant. That’s depressingly true but hasn’t stopped longer-term approaches in other sectors such as health and again seems an insufficient and bad reason for inaction. Maybe the new enthusiasm for resilience will help to reinvigorate the old need for better ways of linking relief and development and help donors and agencies see the need for both short and long-term approaches to helping people make a living.

The second problem is one that I’ve labelled the ‘one cabbage problem’ ever since seeing too many community vegetable gardens in southern Africa in the early 2000s. What I mean by it is that too often, if you dig into the detail of expected benefits from a programme aimed at supporting livelihoods then the net impact on the income of an individual household is likely to be tiny. There are myriad examples of this – ‘community’ projects where each individual household can expect little in return for high investments in time and effort, cash and food for work projects where participation is rationed so any one household can only get a few days pay and food aid where traditions of sharing mean rations are spread thinly between many more households than the intended target.

And the final problem is back to where I started – the depressingly short list of interventions that are being tried to support livelihoods. We still haven’t got much beyond seeds and tools. It would be exciting to see more attention to markets and value chains, to livestock, to petty trading and casual labour, to urban livelihoods and rural to urban links, to remittances and financial inclusion and to land rights but there isn’t much sign of it. And there’s not much sign of the humanitarian system learning from best practice in support to livelihoods elsewhere. For an example of scale and ambition there’s the Chars Livelihoods Programme in Bangladesh [^].

None of which is meant to imply that supporting livelihoods is straightforward in places where conflict and violence are still pervasive [^]. There’s an obvious objection that investments in livelihoods are likely to be reversed when the recipient is robbed or has to flee his / her village for the 3rd time in 3 years. And the risk that livelihoods investments can themselves put people at risk of violence. So supporting livelihoods needs to be sensitive to how conflict affects peoples’ choices and linked much more strongly to protection [^]. But the fact that it’s difficult and risky should not be an excuse for inaction or inadequate action. So here’s hoping that when I’m next in Bukavu I hear about a 12 year programme aiming to support the livelihoods of over a million people in a significant way.

DRC, Getting beyond seeds and tools in eastern DRC, Paul Harvey