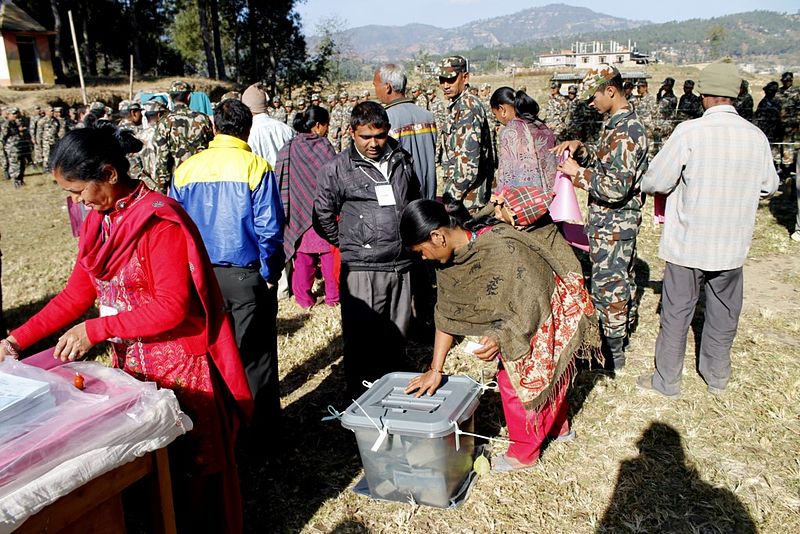 Nepal elections: Stuck between a rock and a hard place

“Nepal’s elections need to be conducted in a free and fair environment, and parties should shift their focus towards the task at hand (finalising a new constitution). Only then can the future of Nepal be built on a foundation of stability.”

After nearly a decade, Nepal is approaching its 2nd national election of the Constituent Assembly (CA). These elections will see 601 national representatives elected to the CA. Though there is still no official process in place for finalising the new constitution, the population of Nepal, as well as the observing international community, have high hopes that the newly elected representatives will press forwards with finalising the long awaited new constitution. The new constitution holds the opportunity to address important demands by various regional and ethnic groups including a republican state, federalism, and most importantly, inclusion.

Why has the new constitution still not been formalised? The first Constituent Assembly in April 2008 national election failed to produce the new constitution and the country fell into a protracted and bloody armed crisis. Though an Interim Constitution was drafted and accompanied by promises of implementing the provisions of the Comprehensive Peace Accord [^] (CPA), the CA elected members failed to formalise and implement the new constitution due to differing personal and political agendas, particularly those of the United Communist Party of Nepal (UCPNM), Nepali Congress Party, Communist Party of Nepal (United Marxist-Leninist) and regional parties from Terai-Madesh. The main sticking points of the interim constitution were with regards to inherent and divisive contradictory demands, including whether Nepal should have one province in Terai-Madesh or more, whether multiple ethnic identities should be formally recognised or whether there should be a single ethnic identity, and finally whether Nepal should have a presidential or West ministerial governing system. 5 years later, nothing has changed and Nepal is now facing the second CA election.

Though the government and political parties have publicly pledged to conduct the CA election on 19 November fairly, we can see mounting tensions between the United Communist Party of Nepal (UCPN-M) and its radical faction, the Communist Party of Nepal-Maoist (CPN-M). To put it bluntly, the CPN-M resents the UCPN-M for abandoning their wartime agenda due to public pressure and failing to implement the CPA provisions. The CPN-M has since been obstructing the election, forming and leading a 33-party alliance aimed to create fear and confusion amongst candidates and the electorate. Added to this is the fact that armed groups further south in Terai have regrouped, accompanying their own political demands with violence, which has resulted in one election candidate being shot dead [^]. The line between politics and crime is no clearer now than it was 5 years ago.

In response to the threat of disruption and escalating violence, the government have mobilised an unprecedented two thirds of the army to the most “sensitive districts [^]”, aka places where the CPN-M and armed groups are highly active, such as Rolpa, Bardiya and Ilam, where we have been conducting our survey [^], and Terai. Though many argue this may actually be adding fuel to the warring faction’s fire [^]. One thing is for sure; fear and tension is mounting and is likely to worsen as polling day approaches and violent confrontations between parties intensify.

Though the election is gathering momentum and the Election Commission (EC) has been working hard to register voters, the political parties have made wild (8 to 10 percent economic growth [^] – India and China would be envious) and unclear promises (housing for 500,000 homeless people [^]) which lack any detail about implementation, and most worryingly, details about how the New Constitution will be finalised and implemented are completely absent. Many parties are yet to even finalise their candidate nomination list. This disorganisation is underlined by the fact that the EC has stated [^] that a total of 332 candidates on the PR candidate list have been asked to clarify their candidacy, age and which political party they are aligned to.

Stuck in the middle of this chaotic and complex picture are of course the Nepali people, who on the one hand are fully aware of the importance of voting to ensure representatives are elected to write the constitution, but on the other hand, face voting under the threat of violence from the radical CPN-M alliance and armed groups.

If the CA elections are conducted in a free and fair environment, and parties shift their focus towards the task at hand (finalising a new constitution), the future of Nepal could potentially be built on a foundation of stability, and we may finally see economic prosperity in Nepal. However, ensuring the security of voters, candidates, ballots and those involved in conducting the election, is already proving to be a challenge. In this context, it is important for all stakeholders involved to ensure the elections are owned by people, and are free and fair.

Bishnu Upreti, Nepal, Nepal elections: Stuck between a rock and a hard place