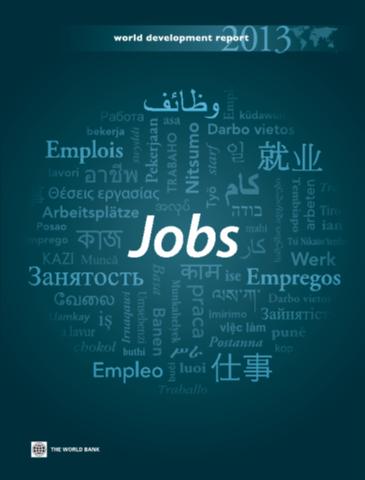 The Missing Piece of the Jobs Puzzle? Reflections on the 2013 World Development Report

As a member of the core team responsible for the 2004 World Development Report (WDR) –  Making Services Work for Poor People [^] – and a consultant to the team that produced WDR 2007 – Development and the Next Generation [^]– I appreciate the scale of the task faced by a WDR team working in a tight timeframe.

In reading the overview to WDR 2013 – Jobs [^] – one thing I particularly appreciated was the way in which this Report, somewhat unusually, built upon a number of themes from previous WDRs, including gender, conflict, youth and urbanization. And, in my view, the connections with previous themes deepened the analysis and added more depth and nuance to the document.

Having said that, one area that the report could have usefully explored further, and to which the Bank and other donors should really give more attention, is the political economy of jobs and livelihoods policies. The World Bank and DFID have, amongst others, increasingly focused their discussions and activities on good governance, ambitiously attempting to strengthen mechanisms for social accountability. But the connections between politics and access to good jobs and employment have long been overlooked in the governance and accountability literature (my SLRC colleague, Rich Mallett, argues a similar point here [^]).

This is a problem. As with basic services, clientelism [^] – a method of political distribution and exchange that is conditional on the behaviours, identities and allegiances of individuals and communities – may involve governments designing policies that are structured in ways to benefit specific political allies or favoured religious and ethnic groups. This divide, rather than a clear ‘rich’ versus ‘poor’ or ‘middle class’ versus ‘lower class’, may be an important analytical issue for donors and government reformers in relation to access to employment and livelihood opportunities.

The WDR 2004 introduced the ‘accountability triangle’ [^]to explore the links between governments, service users and providers, and sought to highlight the political nature of service delivery. But, in retrospect, this element of basic services probably required even more emphasis and analysis, as many of the obstacles to service access and delivery that have been studied over the past decade are the result of politics – not some technical failure. Importantly, and as hinted at above, these issues are not confined to the arena of service delivery. If we look, for example, at public works programmes [^], a good case for examination might be NREGA – India’s pioneering National Rural Employment Guarantee Act. The initiative was recently praised by a senior UN official as ‘exceptional’, but in practice it suffers from problems of corruption and capture, notably linked to the caste and clientelist politics on a state by state or district by district basis in India.

Access to jobs is not a technical issue, but rather goes to the heart of state-society relations

For the policies outlined in the WDR 2013 on jobs, and for alternatives to those policies as well, greater attention needs to be paid not only to the way in which political relations shape jobs policies, but also to the relationship between citizens and the state. We often hear donors and governments talk of the need to enhance citizen engagement in political processes, but making sure this happens in reality is not easy.

Research suggests that for citizen voice to be effective it requires significant engagement and support, as well as channels through which voice can be exercised. Yet, while there are many examples of how states and civic organizations have sought to establish more consistent and institutionalised channels for civic engagement – such as public hearings and consultations, village development committees and participatory district planning councils – it is important to recognize that these are not neutral spaces. Governance and accountability research has shown us how control of the terms of engagement, participation and inclusion is a key issue that must be considered when trying to link citizens to their government institutions. Channels designed to increase citizen voice both reflect, and are infused with, the dynamics of state-society relations – something which may become more problematic in fragile and conflict-affected situations where being overt in voice can be a risky undertaking, with citizens becoming reluctant to ‘speak up’ out of fear.

Relating these points back to the question of jobs and employment, we are confronted with a fundamental question:

If civic engagement is about power relations – among citizens, between citizens and the state and other powerful actors, and between different layers of the state – where and how do livelihood activities and priorities, as well as the political dynamics of markets, affect these relationships?

The WDR 2013 has created space for discussion of these issues, but we now need to build on the momentum around the ‘good jobs’ agenda by taking the ‘governance of livelihoods’ seriously.

An earlier version [^]of this blog was posted on Public World.